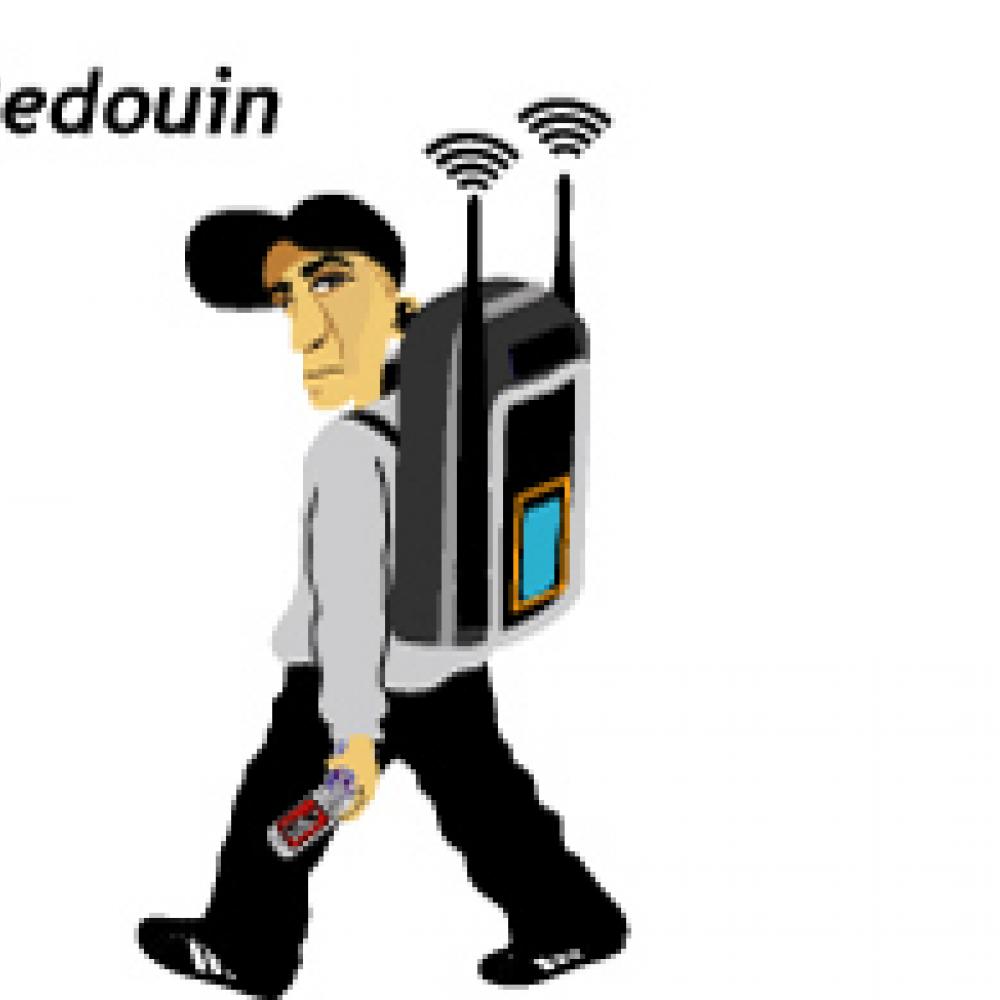 With the proliferation of “WiFi” networks and the mobile devices that access them, the public and private space surrounding us has become literally soaked through with Internet data. The promise of ubiquitous access to the Internet from anywhere, anytime is quickly being fulfilled.

WiFi.Bedouin is a wearable, mobile 802.11b node disconnected from the global Internet. It forms a WiFi “island Internet” challenging conventional assumptions about WiFi and suggesting new architectures for digital networks that are based on physical proximity rather than solely connectivity. Most significantly, WiFi.Bedouin facilitates the creation of a truly mobile web community.
This project is designed to be functional as well as provocative, expanding the possible meaning and metaphors about access, proximity, wireless and WiFi. This access point is not the web without wires. Instead, it is its own web, an apparatus that forces one to reconsider and question notions of virtuality, materiality, displacement, proximity and community. WiFi.Bedouin is meant to suggest that what are often considered two entirely separate realms – virtual and physical worlds – are actually a much more entangled hybrid space.

The Production of WiFi Space: Virtual Places in Physical Spaces

“Space does not reflect society, it expresses it.”
– Castells, M., Space of Flows, Space of Places: Materials for a Theory of Urbanism in the Information Age, in The Cybercities Reader, S. Graham, Editor. 2004, Routledge: London. p. 82-93.

The proliferation of devices with WiFi capabilities in the hands of an increasing number of users introduces a new register of possibility for creation of zones in which one occupies the physical built environment, while also engaged in activities in virtual space. Designing space that is both virtual and physical through the use of WiFi networks is one possible way that a hybrid virtual-physical space can be produced. This project is meant to investigate this possibility, speculating that place and context are the crucial design ingredients for crafting compelling hybrid space.

Without place and context, simply providing access to the Internet via a WiFi node is not particularly innovative at this point in the evolution of access technology. Sitting in a park so that one can check email seems positively dull when one considers that the possibility exists for creating highly particular virtual-physical hybrid micro-communities. Imagine sitting in The Great Meadow in New York’s Central Park and mustering strangers for a game of ultimate Frisbee simply by posting a notice on a free-floating WiFi network? Or imagine announcing that a dog minus its owner was found? Or streaming a video of a short you just shot on your DV camera twenty minutes ago?

Think of the WiFi access point as another piece of construction material that allows for these sorts of networks contextualized by location. It has a certain physical geometry, the way a building or street does. It occupies physical space by virtue of its physical location and the constrained range of its radio. The WiFi access point becomes another architectural component of built space. If we include WiFi nodes to our kit of construction supplies new possibilities arise when we move beyond thinking of it as a way to access “the web without wires.”